Ijen Crater has been calling mountain buffs and nature lovers for years with its wonders. This is no ordinary crater as it shoots and sparks a blue fire in the air. The image of blue flames blowing out of the crater resembles a giant stove. Some see it as an imaginary land in the fairy tales that come to life.

East Java’s Ijen Nature Reserve is proud of being the home of this rare phenomenon. It cannot be any prouder as there are only two sites to witness the blue fire. Other than Indonesia, similar natural magic is available in the Nordic dainty island, Iceland.

It is an honor to possess this blessing and pass it down to future generations. Mount Ijen, an active stratovolcano towers 2,443 meters above sea level, and lastly erupted in 1999. Although it did not enjoy much popularity compared to fellow volcanoes such as Bromo and Rinjani.

It slowly rose to fame in 2014 thanks to its compelling blue flames. To the traditional sulfur miners, it was nothing new—they already discovered it in the 1950s. Today, thousands of tourists flocking Ijen Crater every day for an adventure of a lifetime.

The so-called blue fire is not actually “the fire” as it is a complex chemical reaction. The sulfuric gas comes in contact with oxygen, leading to the combustion of the gas. Thus, the infamous “blue flames” will show up and dance before the wondering eyes. The size of the crater is 960 meters x 600 meters, 200 meters deep.

The best time to watch this ballet of fire is from 2 to 4 AM. It takes about two hours for this midnight trekking, about three kilometers. It is pitch black and the only source of light is from the flashlights. Sometimes, the smell of intense sulfur lingers in the cold mountainous air.

It does not last long though as the sulfuric fumes go in the wind direction. Don’t rush to the top and please take each step very carefully.

Another natural treasure of Ijen Crater is its acidic lake, the biggest one in the world. To get a better look at the sulfur mines around the lake, explorers have to make a descent down where the sulfur smells stronger. Ijen lake’s water is greenish-blue and the bottom is not visible.

It is so murky, that the sun can hardly penetrate it—perhaps it is the acid. Scientifically speaking, the lake has a rich content of hydrochloric and sulfuric acid. Rumor has it that its acidity can physically dissolve a grownup man within hours.

Nonetheless, many find it intriguing and have decided to dip their finger into it. Although nothing happens, it is not recommended and tourists have to wash their hands immediately.

As the marvelous dance of flame comes to an end, the morning sun gradually rises. Its golden ray showers Ijen’s peak and unveils the dark remnants of the night. The view from the top gives a look at the neighboring mountains. The tips of Raung, Suket, and Rante, that surround Ijen Crater are very visible.

There is nothing beyond the horizon but more mountaintops, clouds, and sky. The sun also allows a clearer vision of Ijen’s gray dusty sandy terrain. A seven-meter-wide path allows nature enthusiasts and locals to walk around comfortably.

Steep slopes flank the sides of the path, smoke blowing out of the cracks. The temperature gets warmer as the sun rises higher and higher above.

It is true that sulfur is very much used for production purposes. In Ijen however, the traditional sulfur miners turn it into pieces of art. They melt chunks of sulfur and mold them into souvenirs of various sizes and models. There are palm-sized teddy bears, flowers, hearts that say “I Love Ijen”, and napkin holders.

Each ornament’s price range from at least Rp25.000 – the bigger the size, the higher the price. Every day, the miners stare death in the face by climbing down into the crater. They do such a life-risking ordeal in search of sulfur to support their family. They wear simple scarves wrapped around their faces as a mask for protection.

No proper safety gear such as helmets and boots, or even tethers. The only way to appreciate their hard labor is by buying some of their artworks.

There is an innovative way to get to the top of Ijen Crater; by human-powered carts. These carts are similar to the carts for transporting heavy objects used by construction workers. It has two slim wheels, one on each side, and it has no top. It is 70 centimeters wide and it can carry only one adult in one go.

The passenger has to lie on his or her back on the cart, face up. He has to bend his knees and hangs on tight to the cart’s bars. Two men pull it from the front and one man is pushing it from the back.

This humble mode of transportation is popular among elder vacationers who cannot hike such distance. One trip to the top costs Rp600.000, and the trip back down is Rp200.000.

Travelers can drop a visit to Ijen Crater every day, better come at midnight. Remember that the blue flames are only visible at night and it requires midnight hiking.

As with most of the tourist destinations here, the admission fee for an international tourist is different than the local. The entrance ticket to the Ijen crater is Rp100.000 on weekdays and Rp150.000 on weekends and national holidays. Tourists can purchase the ticket online or pay it at the entrance gate.

The base camp is the only place with public restrooms, that’s it. There are no public restrooms along the track to the top, not even one. During the trek, some climbers decide to dig up a little hole to relieve themselves. This toilet hole not only saves lives but also creates an unforgettable experience.

Guides are ready to help with the hiking, ensuring that nobody is getting lost. The fee for the guide varies starting from at least Rp 100.000. Hikers can rent a protective mask (to protect them from sulfur) for Rp25.000 each. A flashlight is also for sale for those who forget to bring one.

How To Get To Ijen Crater

From East Java’s capital Surabaya, hop on a train and stop at Jember Train Station. From the train station, take public van transportation to the Arjasa bus terminal in Jember. Next, stop at Arjasa and take another small elf to Bondowoso Bus Terminal.

From Bondowoso Bus Terminal, get on a minibus called elf bounds for Sempol Village. Once arrived in Sempol village, get a motorcycle taxi ojek to Ijen. It is, of course, more convenient to reach the destination by car or motorcycle.

In that case, start the trip from Banyuwangi regency, still in East Java. From Banyuwangi to Ijen Crater is about 35 kilometers, taking two hours of driving. Despite its simple route, Banyuwangi – Licin – Paltuding – Ijen, the road is heavily damaged. 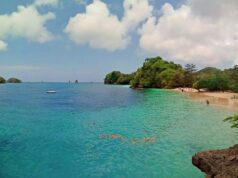 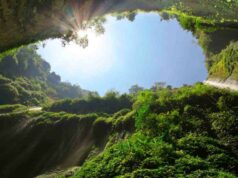 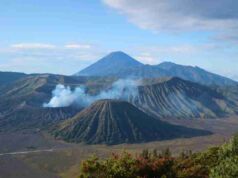 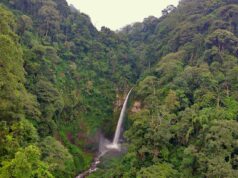