Small islands like Lengkuas Island is just one from the countless number of small island scatter in Belitung. Tiny, yet it represents the beauty of Indonesia’s archipelago. For locals tourists, Pulau Lengkuas – that’s what the locals called it, echo from many years back then.

It begins when the famous book adapted into a movie. The screenplay successfully portrays a captivating story of young boys living on a small island. It also introduces Belitung gems. Beach with pristine clear turquoise water, warm sand beige. The calm and predictable current. The choices now for domestic travelers aren’t just beaches in Bali, Lombok, and Yogyakarta anymore.

Lengkuas Island has a long history. It’s proven by the lone lighthouse built during the colonial period. In modern times, this lighthouse has become a beacon that marks the island. It just simply doesn’t feel complete to visit Lengkuas Island without visiting the famed lighthouse.

The lighthouse isn’t the only attraction on the island. Backpackers swarm the island to get a taste of its clear turquoise water, swimming to snorkeling. And as it is a fairly small island, curious explores can take a turn and circle the island in under an hour.

Lengkuas Island Lighthouse A Beacon In The Dark

The most famous landmark in Lengkuas Island is the old lighthouse. It was built in 1882 when Indonesia was still under Dutch colonialism. Back then, the lighthouse was built to guide Dutch ships docking on the island.

The lighthouse is still in use up to today. And is actually part of a chain of lighthouses starting from Tanjung Priok, Jakarta. It is now under the direction of Indonesia’s Ministry of Transportation. The interior of the lighthouse as well as the keeper’s house hasn’t changed a lot. It still uses the furniture from the colonial era.

Lengkuas Island scenery is simply outstanding. The beach on the island is framed by large granite rocks. These towering stones make good natural seats to take photos. Some of the granite formations are even very large and expansive.

The formation of granite rocks along the island also results in something else. Through the gaps of these rocks, seawater comes in and finally results in a shallow pool. This shallow pool is known among tourists as Kolam Bidadari. It is not too wide but enough for people to soak in without venturing far into the sea.

Swim And Snorkeling Under The Sea

The clear and calm current around the island makes it a favorite spot for tourists to swim or snorkel. Many come to Lengkuas Island just for this purpose. The island is also part of the island-hopping destination. It departs from the main island, Tanjung Kelayang beach. And don’t worry as part of the island hopping tour, the fisherman will provide snorkeling equipment too.

Divers will able to find various types of fish like yellow-tailed fish, mackerels, and mullets. During certain seasons, lucky visitors will be able to see stingrays and dolphins.

Lengkuas Island provides its guest with the most basic necessities. On the island, there are food stalls and public bathrooms. Prepare small notes of Rp2.000 to use the bathrooms. The food stalls offer mostly snacks and instant noodles. Fresh coconut water is Rp25.000. Quite pricey compared to the price on the main island.

Unfortunately, there are no lodgings available on the island. Tourists instead can find hotels at Tanjung Kelayang or Tanjung Binga. Hotels from both areas have rooms overlooking Lengkuas Island. To stay at a hotel in these areas, the price for a night starts from Rp280.000.

How To Get To Lengkuas Island

Lengkuas Island is approximately 30km from the heart of Belitung. From downtown Tanjung Pandan, travelers can start by heading to a beach near Lengkuas Island. The option is either rent a car or a motorbike. Or wait for the DAMRI shuttle van that departs from Belitung Airport.

The rental fee for a car starts from Rp400.000 for day rent. On the other hand, a motorbike is cheaper Rp60.000 for a day. As for the Damri shuttle van, the first departure is at 8 AM. The shuttle van will depart and stop at several destinations, the fare is Rp45.000 from the airport.

From here, Tanjung Kelayang, Lengkuas Island is just 20-30 minutes away by boat. The rent price of a small boat for island hopping costs around Rp350.000 to Rp500.000. It depends on the capacity of the boat. Another way to reach Lengkuas Island is by renting a boat from Tanjung Binga or Tanjung Tinggi. The rent fee is similar, it just takes 15-20 minutes longer than departing from Tanjung Kelayang Beach. 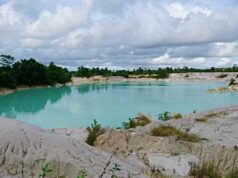 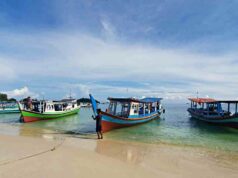