Indonesia is entitled as the land of a thousand temples for the reason explained in the nickname. The Hindu and Buddha Kingdoms’ relics spread in Sumatra, Java, Bali, and South Kalimantan areas. Sojiwan temple is one of the temples found in Klaten, Central Java.

In the southeastern area of Prambanan Complex, Sojiwan Temple situates at the Shiva Plateau, among other prominent temples that are only several km away. While Shiva plateu, as its’ name suggests, is home to the temples dedicated to the god Shiva. Not all of the relics found here are dedicated to God Shiva worshipping.

It is also home to the ones that belonged to other sects of Hinduism beliefs; such as Waisnawa, Phallus Cult, and Ganesha. Sojiwan, on the other hand, has a Buddhism background. In fact, Sojiwan is the fifth biggest Buddhist temple in Central Java.

It is evident that Indonesian ancestors have been living in harmony and tolerance. The temple was built in the same era as the others within the area. In addition to the temple’s majestic appearance, the complex presents calming natural atmosphere.

The road leading here is also in good condition but is not wide enough. It’s a typical rural road; however, is accessible by bus. To get into the main structure, tourists have to climb up several steps. Visitors can go around the temple by walking through its’ terrace.

The History of Sojiwan Temple

The relic of the Ancient Mataram Kingdom from the 9th to 10th century AD is a Mahayana Buddhist temple. According to the Rukam inscription dated 829 Saka/907 AD, King Balitung from Syailendra Dynasty built the temple.

The king was a Hinduism believer, who built the temple as a tribute to his grandmother. Nini Haji Rakyran Sanjiwana was a Buddhist; and the temple bears her name, Sanjiwan or Sojiwan. There was nothing known about the Sojiwan temple until its’ report by Colonel Colin Mackenzie, one of Rafless’ subordinates, in 1813.

When investigating ancient remains around Prambanan plain, the colonel found the wall ruins that surround the temple. The restoration took place and was almost done in 2006. However, the earthquake ravaged the work. The second restoration was undertaken and accomplished at the end of 2011.

Sojiwan Temple was made of Andesite stones. The complex covers an area of 8,140 square meters with the main shrine measuring 401.3 square meters and standing 27 meter high. Its structure resembles that of Mendut Temple. Three tiers form the roof on which a line of small stupas decorates each of the 2 tiers.

A big stupa stands at the top tier. The main temple faces the west with the main temple surrounded by 3 side chambers and 1 viewing chamber. In front of the main shrine, several stupas serve as perwara (secondary) temples. However, only 1 of which was restored successfully.

At the east, the stairs are flanked by a couple of Makara statues with a Kala carving at the gate top. The temple body is originally full of beautiful shoots carvings; however, many of them are lost and replaced by plain stones.

The Relief Sculptures On The Temple’s Base

One thing that makes Sojiwan Temple prominent is that it offers not only composure but also fables to tell. Visitors may travel through times and go to the ancient era while having a tour around the temple. The reliefs on the temple’s base present Jataka and Pancatantra fables from India.

Of the 20 panels, 12 are discernible by examining the panels clockwise. The reliefs tell the fables of two men fighting, Goose and Turtle, the race of Garuda and Turtle, Monkey and Crocodile, Mouse and Snake, Wolf and Woman, The King and Putri Patih, Elephant and Goat, Lion Man, Wolf and Bull, Kinnara, and Lion and Bull.

The refreshing air of the natural atmosphere is the first thing tourist will have once here. Surrounding trees and grassy landscape presents the green scenery which is both soothing and calming. Sojiwan temple erects majestically in that picturesque scenery. Tourists are free to take photos with this amazing background!

The reliefs on the temple’s base tell the fables children would love to hear. Take a tour around the temple clockwise and figure out through the 20 panels at the base of the temple. The tour will give a historical experience while appreciating the architecture and cultural touch of the temple.

The temple’s park is a lawn with surrounding trees. It is relaxing to spend some time after a tiring walk around the temple. There is also a museum in which tourists can find thorough information about the temple.

The best time to be here is in the morning and afternoon. However, there could be many visitors in peak season. Usually in the mid and at the end of the year, or, during the Eid Al-Fitr holidays. But, if tourists happen to be here at midday, put on a sun hat and apply sunscreen on the exposed parts of the body to avoid sunburn. Sojiwan Temple is open from 8 AM to 5 PM.

There is a 1 day pass ticket to see Prambanan, Plaosan, and Sojiwan Temple. And it cost US$30 for adults and US$20 for children.

Nearby: Guide To Explore Plaosan Temple.

There are relatively complete accommodations surrounding the temple. A good road is the first guarantee that tourists won’t be exhausted just to get here. A spacious parking lot also makes sure parking is not a problem. And the parking fee only costs Rp2.000 for a motorcycle, and Rp5.000 for a car. Information centers, toilets, and gazebos are also available to meet all tourists’ needs.

59 meters to the west, there is a tourist park to pamper the children. There is a playground to cheer up the kids after strolling around the temple. There are also bendi (horse cart) and horseback riding the kids will love to try. The entrance ticket to the park is only under $1.

The temple is surrounded by many restaurants. Among others, 650 meters to the southwest is Ayam Geprek Prambanan. The restaurant serves a combo package of crushed (geprek) fried/roasted chicken complete with sambal, rice, and iced/hot tea that starts from Rp21.000 ($1,3). Or, Temen Donat sells potato donuts with various toppings that start from only Rp2.000, and Es Bobba at only Rp5.000.

How To Get To Sojiwan Temple

The other mode of transportation is Prambanan Express. From Tugu Station at Yogyakarta, take the stop at Brambanan Station. Then, walk 800 m to the south. The train ticket costs Rp8.000.

For travelers coming with private vehicles, take the right turn at the traffic light of the Prambanan Temple’s gate. Follow the road and cross the railway and paddy field area. Then, take the left turn, Sojiwan Temple situates not far from the first junction. 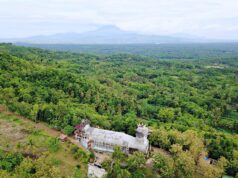 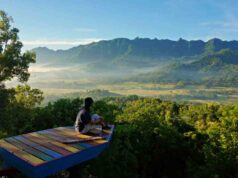 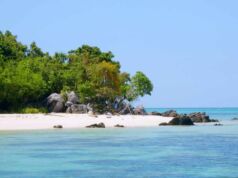