Mount Tangkuban Perahu must be on the tourists’ bucket list to complete the entire Bandung experience. Roughly 30 kilometers away from Bandung, this stratovolcano draws thousands of visitors every day. The number can rocket to at least 10,000 people on national holidays or long weekends.

No wonder it has everything in one package: sky-high elevation, craters, and green outdoors. Since it is an active volcano, the geothermal heat makes everything in its way hot. Thus, it results in the existence of hot water springs around Tangkuban Perahu.

One of the nine craters, Kawah (crater) Domas, has sulfuric hot water ponds. People of all ages have traveled here to wash their feet at the ponds. They believe that pure sulfur can cure rheumatics and skin diseases.

Towering 2,084 meters above sea level, Tangkuban Perahu gives a full aerial view of Bandung-Subang. The lush valleys, slopes, and tea plantations of the surrounding areas are also insight. Grayish white mist hovers above the trees and the craters like dots of clouds. Sometimes, hawks and falcons tear the sunny blue sky with their high-pitched shriek.

Just like most places in Indonesia, it has its own myths and legends. Ages ago, there was a family of two, mother Dayang Sumbi, and a son Sangkuriang. They lived together with a faithful dog named Tumang in the middle of a forest. Tumang had been living with Sumbi for years long before Sangkuriang was born.

One day, they had a quarrel and Sumbi hit Sangkuriang so hard in his head. The ten-year-old boy ran out of the house, bleeding, and did not return. Feeling guilty, Sumbi prayed to the gods to be reunited with her son again. Never did she know that Sangkuriang was suffering from amnesia due to his mother’s assault.

He forgot everything about his childhood, including about Sumbi, Tumang, and their home. They were living their own lives ever since the incident, apart from each other. Sumbi stayed at her home without getting any older thanks to the gods’ will. She remained ageless and beautiful, still attracting many men who saw her in the forest.

Sangkuriang lived on his own out there, growing into a strong handsome man. About 12 years later, the two unexpectedly met but without recognizing each other. The more time they spent together, the more they were in love. One day before their wedding, Sumbi noticed a scar on Sangkuriang’s head.

She realized it was the same spot on which she hit her child long ago. She told Sangkuriang that he was her son but he did not believe it. Sumbi, therefore, gave Sangkuriang an impossible task: made her a massive lake and a boat. He had to finish before dawn and if he failed, the wedding would be canceled.

Sangkuriang took the challenge, even almost completed the job—making Sumbi anxious. She waved her magic scarf in the air which looked like the morning sun. Sangkuriang got mad, kicked the boat upside down which later turned into Mount Tangkuban Perahu.

The trio of Volcano Craters

This active volcano has erupted at least 30 times for the last 40,750 years. As a result, it has nine craters scattered around the area with three top craters. They are Kawah Ratu (Queen Crater), Kawah Upas (Upas Crater), and Kawah Domas (Domas Crater). Kawah Ratu is the queen of the trio as it is the biggest one.

Kawah Ratu looks like a giant bowl with pale gray sandy sides. The water-like liquid at the bottom changes colors from blue, green, to gray. White steam blows out of the gaps on the crater’s walls, creating a dramatic aura. The more it bursts, the more sulfuric the surrounding air will smell.

Despite lines of bamboos fence the upper edges, travelers must not lean on them. Its neighbor, Kawah Upas, may be smaller in size but it has the same charm. It takes about 30 minutes of trekking from Kawah Ratu to Kawah Upas. The sandy slippery terrain can be a challenge—that is why it lacks explorers.

They miss a lot though as every step of the grueling hike does pay off. The crater’s cracked bottom, black dead trees, chalky white slopes make it a worthy panorama. Lastly, Kawah Domas lures many beauty seekers to smother their bodies with sulfuric mud.

It is much closer to the main gate than Kawah Ratu, about one kilometer. Tourists need to climb up and down hundreds of staircases just to get here. They might be hungry and craving some munchies by the time they have arrived. In that case, just go boil some eggs right in Domas’ natural hot water ponds.

Other than its tourism potentials, West Java is also famous for its broad culinary heritage. From spicy and savory, to sweet and sticky, it definitely satisfies all palates. At Tangkuban Perahu complex, visitors can sink their teeth in almost every local dish. The food stalls sell roasted rabbit skewers in peanut sauce with rice.

Locals also sell the highland’s commodities such as strawberries, blueberries, and blackberries in plastic boxes. Have a cup of bajigur, a warm coconut milk-based drink, to end the day. Feasting on the comfort food under Tangkuban Perahu’s tall pines makes everything even more memorable.

Nature lovers can seep into this gorgeous site every day from 7 AM. It is closed every 5 PM, even before the day turns dark. Although vacationers cannot see the sunset, this natural tourism park is too good to miss. As for those wanting to experience the three craters, they should come early. Remember that Kawah Upas and Domas require a trek for 30 minutes to an hour.

Just like other tourist attractions in Indonesia. International visitors will have to pay higher for the entrance fee. Tangkuban Perahu entrance fee costs Rp200.000 on weekdays and Rp300.000 for the weekend.

Restrooms, praying room is available on the premises. There is huge space for parking lots and dozens of small eateries near the lot.

Guides are ready to escort travelers to Kawah Domas and Upas. Since the trek to both craters is quite moderate, it’s better to hire one. The fee for the guide costs around Rp100.000–Rp150.000, make sure to have a deal before going.

How To Get To Tangkuban Perahu

From Bandung’s Leuwi Panjang Bus Terminal, take a Bandung-Indramayu bus via Subang. Stop near the main gate of Tangkuban Perahu, before the border of West Bandung-Subang. People traveling by train to Bandung should stop at Bandung Train Station. 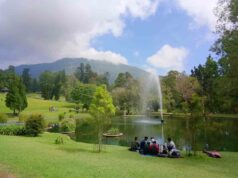 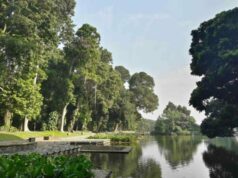 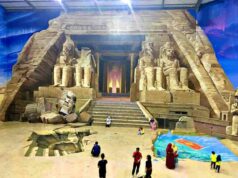