Labuan Bajo is one of the 5 super priority destinations promoted by the Indonesian Government. It was only a small fishing site but is home to dozens of natural wonders the world’s adventurers seek after. Komodo International Airport Labuan Bajo is available to accommodate tourists.

Despite being small in size, Komodo International airport is a modern gateway for quite busy tourism activities in the East Nusa Tenggara region. Labuan Bajo offers natural beauty everywhere from up at the hill to down underwater. And, from its unique culture to the famous Komodo dragons.

The surrounding nature also provides an outstanding view of Flores Island. Scenic views of the spectacular sky embellish the background of the runway.

The airport is easy to reach from anywhere in Labuan Bajo. It is only 2 km from the center of Labuan Bajo, on the westernmost tip of Flores Island. And, it only takes 11 minutes from Labuan Bajo Port (or 3.5 km) to the west.

After accomplishing the expansion project at the beginning of 2022, the airport will serve international direct flights. The government has widened and extended the roads to accommodate tourist activities.

In addition, a new multipurpose terminal is also being developed in Wae Kelambu. It is about 10-12 km from the old port at the center of Labuan Bajo. The old port is dedicated especially to serving tourist ships.

There are 7 direct flights connecting Labuan Bajo to Denpasar and 2 to Jakarta. Tourists can book flights from the airlines’ websites such as Garuda Indonesia, Lion Air, Nam Air, and Batik Air.

Have a delayed flight or just need to chill down for a while? Komodo International Airport provides a lounge for tourists to take some rest. The business class lounge situates in the check-in hall. The lounge provides many seats. With Rp110.000, tourists may get Wi-fi and an Indonesian food buffet. Power outlets are available to charge handphones or laptops.

The Indonesian Government has developed the airport to accommodate wide-body aircraft,  ready to serve international flights. However, there is none for the time being. The departure Terminal mainly serves tourists mostly from Jakarta and Denpasar airports.

Komodo International Airport is a small airport. Therefore, domestic departure and arrival are only within walking distance. And, at the arrival terminal, tourists can collect the checked baggage from two small carousels.

There will be people waiting at the exit who will ask for the luggage tags. The officers will make sure tourists have the correct bags.

If tourists need snacking or drinking, there are cafes and mini stalls that sell snacks and bottled drinks. Convenience stores are also available. Tourists may get a beer at Rp38.000 – Rp50.000 per can.

The stalls are at both domestic and international terminals. The airport also provides Wi-fi to accommodate tourists’ communications. Some souvenir stalls, cake shops, and cafes also stand near the departure waiting room.

And, just across from the airport building, there is a big souvenir shop that sells a lot of a variety of Labuan Bajo souvenirs. From snacks to different types of T-shirts. The cafe can also be found here on its third floor.

Currency is not a big deal here. There are 2 money changers at the airport. One is run by BRI Bank and the other is run by a private company at the arrival. The booth opens from 8 AM to 6 PM. ATM machines are also available on the premises.

Sometimes, luggage can be troublesome if tourists could not handle it well. Don’t worry. To safeguard tourists’ luggage, there is a luggage wrapping service at the Departure terminal.

At the arrival, porters are always ready to give a hand, sometimes without being asked first. There is no official fare for the porter’s service. Make sure to agree on the fee first to use the porter service.

Airport facility is one of the determinant factors in tourists’ experiences. Komodo International Airport has quite complete facilities. The toilets are clean, the parking lot is spacious, and waiting rooms are available with many seats. The airport also provides prayer rooms, a smoking area,s and even a nursery room.

For tourists coming with children, a small play area with photo spots is also available near the waiting room. It is surely useful to keep the kids busy while waiting. However, the facility is crowded on Friday-Sunday.

If tourists have booked lodging, many hotels or hostels offer free pick-up from the airport. The service will welcome tourists at the arrival exit. Or, DAMRI provides the most affordable and comfortable mode when it comes to transportation at only Rp10.000 fare. The buses serve daily from 7 AM to 5 PM.

A total of 4 units of buses with 16 trips serve from the airport to Puncak Waringin, Bukit Sylvia, Kampung Ujung, Hotel Marina Labuan Bajo, Hotel Puri Sari, and several other hotels. The ticket is available at the departure counter at Komodo Airport. In the future, tickets will be available on DAMRI Apps. 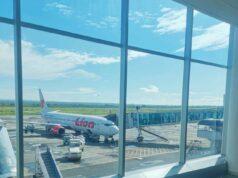 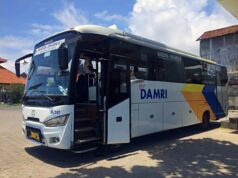 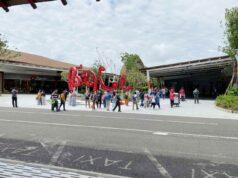