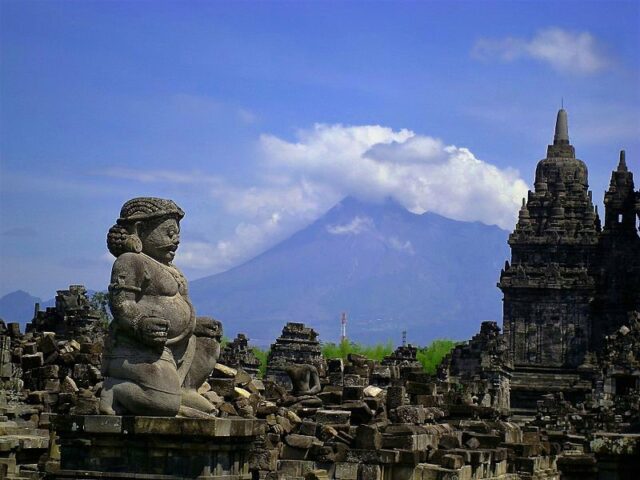 Yogyakarta always has a special spot in traveler’s hearts. The extraordinary Javanese culture, historical buildings, and the locals are the main reason. Surround by the active volcano, strong wave ocean to their ancient sites. Explore the entire ancient temple scatter in the city. Make sure to add Sewu Temple to the go-list. Discover the story behind the center of Buddhist civilization.

Sewu Temple is the second-largest Buddhist Temple complex in Indonesia. For the history lover, make sure to spare a day or two. There is a lot of myth and legend covered behind every temple in Indonesia. One includes what the visitor will find in the magnificent Sewu Temple.

The relics and inscription found in Sewu reveal some indisputable facts. That the construction of the temple began in the 8 century, during the reign of King Mataram. The King Rakai Panangkaran was a Hindu Prince. The initiation of Sewu Temple is interesting – coming from a Prince with a different religious background.

People believed that the marriage between King Rakai to a Buddhist princess-Pramodhawardhani was the initiation of Sewu Temple. The architectural and huge scale of Sewu Temple reveals how the temple was important back then. Particularly since for some reason Sewu Temple location coincidentally close to Prambanan Temple.

The evidence found draws a conclusion between archaeology experts on what was the temple functions. Sewu once also was the royal Buddhist temple. It was once a religious site, a place where royals perform the religious ceremonial.

Temple that is also homes for people learning Buddhist. University for People seeks enlightenment. And home for Buddhist people practicing religious ceremonies back then. The main temple is guarded by 2 small temples. Bubrah and Gana temple located on the east and south side facing the prominent temple.

Sewu Temple is the largest Buddhist complex in the Prambanan Temple area. The architectural design of the temple is rectangular with 4 entrances. The main entrance located on the east side of the temple complex.

The Stone Guards. Each entrance is guarded by the giant twin Dvarapala statues. The statues with their armor weapon are the common element in Hindu and Buddhist culture. Dvarapala statues in the Sewu Temple area believed were the watchman.

Make sure to notice the twin Dwarapala statues before entering Sewu Temple. The Dwarapala reaches 2.3 meters with 1 knee bent and the other kneeling.

The main entrance of the main temple is located on the east side. Even if there are 3 additional doors facing the north, south, and west. The chamber inside the main temple once holds Buddha statues.

Sewu Temple which built before Prambanan and Borobudur Temple often missed by visitors. Mainly since visitors are not aware that there are other temples in the Prambanan complex.

The distance from Prambanan Temple is not really far. But since most visitor faces the hot temperature. Exploring and discover what’s in the Sewu temple sometimes not the option.

There are 249 temples before the earthquake hits the temple in 2006. Most of the small temple ruins scatter all over the area. Letting the main temple stands tall companionless. But the restoration work still continues now. To restore the once use to be a magnificent center of Buddhist culture.

Even if the restoration works still continue until now. Visitors are allowed to explore the entire temple. The impressively carved stone and fewer tourist hordes are suitable for visitors looking for a tranquil moment.

The big trees shading the temple complex is a perfect spot for eating lunch. Pack a sandwich and enjoy the volcanic scenery around the temple.

Since the location of the temple is in the same complex as Prambanan Temple. There is no additional fee to explore this Buddhist temple. A day pass to Prambanan does include an entrance to this splendid temple.

Visitors with young kids or senior visitors can easily hop on to a golf car. Visitors will be charged a small fee for circling the huge temple complex by a golf car. The car will make stops at Sewu gate and allow visitors to explore the temple. And bring visitors back to the exit gate of the Prambanan temple.

There is also a bicycle rent beside the golf car counter. For guest who needs more flexibility exploring Sewu. Renting a bicycle will be the best option.

Among Buddhist people, Sewu is considered sacred place. Visitors are expected to dress and speak properly during their visit to the temple. Explore to Prambanan first, continue to Sewu and head directly to Ratu Boko Temple to see the magnificent sunset.

A day itinerary is enough to cover the entire 3 temples. As the location of the temple itself is not really far from each other. Always pack a liter of water, as the visitor will be facing a hot temperature.