Out of the six palaces, Tampaksiring was built after Indonesian independence. Balinese style merges with modernism is the primary elaboration for the architecture of the palace. Even more, next to the palace the holy water running from Tirta Empul Temple. Forming a flawless connection to the most essential building in one country.

Serenity and a self-composure of traditional architecture. Tampaksiring Palace suits well for holding any state activities. Hence the entire environment made the first president of Indonesia, Soekarno. Finally, reach a decision to build a presidential palace.

In contrast to the other Indonesian Palace, Tampaksiring Palace is the only building. That its construction is ordered by the very first Indonesian President Soekarno. By portraying Indonesian culture, Bali in particular. Tampaksiring is an unerring choice to host the VIP during the state duty trip. One of the best Indonesian architects, R.M. Soeadarsono.

Likewise, involved in designing the Presidential Palace. The area is originally a lodgement.  Own by the King of Gianyar. Formerly, the King itself greets and welcome the foreign guest. Also does the first President himself to his lodgement. After few times stay and the fascination for the King lodgement.  The King decided to give the land to the Indonesian government.

Tampaksiring Palace is built in a high area 2,290 feet above sea level. The height of the location makes the building clearly visible from the outside. In particular, the visitors who explore the Tirta Empul Temple. The distinctive of the building as a presidential palace is clearly shows by its pretentious design.

Tampaksiring Palace is divided into four main buildings. The first building call Wisma Yudhistira. While the second building Wisma Merdeka built-in 1957. The construction of the palace is complete as its original plan. To host the VIP delegation during their visit to Indonesia.

As the request for entertainment and a closer place for the VIP guards. The Indonesian government builds second buildings.  The development of the second buildings, Wisma Negara and Wisma Bima finish in 1963. Visitors could visualize the story behind the Presidential Palace.

Exploring room where the President and most VIP spend their night. Seeing the meeting and conference hall where all the officials discuss the state matter.

Sets in the middle of the palace, Wisma Yudhistira lies on a 1,825 square meters area. The function of the entire building is for the President and officials. It’s where the President and VIPs spend the night. Visitors could witness an extravagant luxurious room for the VIP.

The Queen of the Netherlands, Juliana. Amongst one of the leaders who had spent some nights in the palace. The Queen is invited by the Indonesian President. During her errand bringing back a manuscript. Certainly, it belongs to the Indonesian Government that has been taken during the Dutch era.

Following with King Bhumibol Adulyadej of Thailand. Tampaksiring Palace is also hosting the King of Thailand during his visit to Indonesia. The palace is his last destination during his state duties. After visiting Jakarta, Yogyakarta, and Borobudur Temple. Finally, the King stays and relishes the beauty of the palace.

The Prime Minister of India, Jawaharlal Nehru. During his visit to Indonesia while discussing the independence of Indonesia. Also, invite to visit and stay in Tampaksiring Palace. Followed by some of the other officials. Like the President of Vietnam, Ho Chi Minh, and President Ne Win of Myanmar.

The area of Wisma Merdeka lies in a 1,200 square meters area. In the building, visitors could find two Presidents’ bedrooms. Furthermore, the family room, guest room, and stunningly decorated office. Sets in the same building. Some statues and paintings made by popular artists adorn the Presidential Palace wall.

The Wisma Negara is widely around 1,476 square meters. This building function is as the entertainment hall for the officials. From Wisma Yudhistira, visitors could see an interspace connection. A 40-meter-long bridge with a width of 1.5 meters connects two buildings. Both the President and VIP use the bridge to go to Wisma Negara. Therefore, the bridge is well-known as the Friendly Bridge.

Wisma Bima or well-known as the multifunctional Room used for the President and VIP guard station. Sets in the area of a total of 2.000 square meters. Before the building exists, the guards’ are staying quite far from the Palace. It is hard for the guards to do their job. Protecting the VIP from a quiet distance place in case of an emergency.

First of all, there are protocols and an online form to fill. Before the public guest is granted a visit. Unlike any other tourist destination,  Visitors must first submit an online letter of request. The request letter addressed to the Palace Chief of Presidential Tampaksiring Palace. There is no entrance fee to visit the Presidential Palace.

The applications have to submit 3 days (working days) before the visit day. Furthermore, it has to state the day and date of the visit. As well as a complete address and visitor name. Likewise the phone number (mobile number of the person in charge). The letter has to be submitted by the visitor itself, not by the travel agent.

Both male and female visitor is not allowed to wear a casual shirt and slippers. The visitor is required to wear a formal outfit (trousers, a dress covering the knee, and wearing shoes). Bring the approval response mail sent by the palace. Tourist is not allowed to bring a weapon, cigarette, bag as well as food. Touching and taking pictures of paintings is strictly prohibited. As well as bring a camera and Handycam.

The Presidential Palace is open for public visitors from Monday to Saturday. While the palace is closed on Sunday, the Indonesian national holiday and religious feast. Subject to circumstance and approval from the Chief of the Palace.

How To Get To Tampaksiring Palace

As only potential visitors could enter the palace, public transportation is not available. Visitors also can see a glimpse of Tampaksiring Palace when visiting Tirta Empul Temple. Which is located right below the palace. To get to the Tampaksiring area, renting a private car will be more convenient.

The average price for a private car with driver and fuel is Rp500.000/10 hours. Rent a motorcycle will cost Rp 100,000/24 hours. The guest can park the private car or motorcycle in the Tirta Empul Temple parking lot. 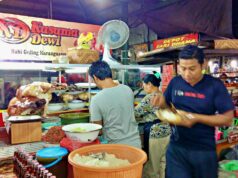 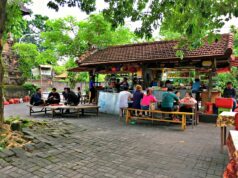 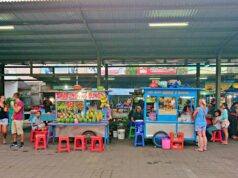 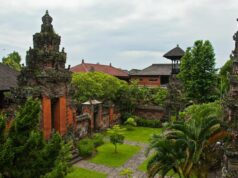