Discover more of Javanese culture in the city center of Yogyakarta. Look and learn a piece of culture and history in Yogyakarta Palace. While the royal palace represents spiritual, philosophical, and cultural values in Javanese society. The Kraton itself still functions as the private residence of the royals family.

The King of Yogyakarta, Sri Sultan Hamengkubuwono X still lived in the palace. The home of the royals sets in the heart of Yogyakarta. Not far from the center of the city monument. At that time, the location is chosen because of safety and security reasons.

Two rivers, Code, and Winongo, right across the palace are considered to be secure parameters. The rivers will be the perfect defense when it comes to facing the enemy. Aside from the security aspect, the palace area is safe from flooding that might burst into the palace.

Yogyakarta Palace is evidence of the glorifying kingdom years ago and still, exists now. The Royal is able to maintain the old tradition in the modern era. Without disregarding the value of Javanese culture. A belief in spirituality, philosophy, and their root culture.

Yogyakarta Palace is a cultural heritage building with some open buildings and rooms. The palace sets right in the middle of a total wide area of 14.000 m2. The architect behind the construction of the palace is Sri Sultan Hamengkubuwono I.

Yogyakarta Palace has an open building area called Plataran. Every Plataran is divided by a gate called Regol. Each of them carries a different typology classified based on the roof. The Bangsal structure with no wall as a platform. The other hall called Gedhong has a wall as the platform made of wood or bricks.

Yogyakarta Palace is surrounded and covered high by the fort. A 3.5 meters high wall with 3-4 meter thickness. Some parts of the fort were used to keep weapons and ammunition. In four corners of the fort. The guest will get to see a small hole, a bastion, uses to spy enemy once.

There are seven main Plataran as the core of Yogyakarta Palace. Explore from the north of alun-alun to the south, to see the historical meaning of the building.

Pagelaran is a place for Abdi Dalem to meet Sultan as the king in a ceremony. During the ceremony, the Sultan will sit in the Sitihinggil Lor area. The official area where the King waits and leaves the throne to his residence.

The second Plataran is an area with some Keben trees surrounding the place. With Regol Kamandungan or Regol Srimanganti as the connection.

On the west side of Bangsal Srimanganti, today is the stage for the traditional performance. This area is also a place where Sultan treats the guest. Meanwhile, in the east, Bangsal Trajumas is an area where the royals keep their heritage. And most of the Royal heritage from time to time is being placed here.

Kedhaton is the main Plataran with the highest hierarchy of all areas. And as the center of the Yogyakarta Royal Palace. Two main buildings name Bangsal Kencana dan Gedhong Prabayeksa are the most sacred place.

Bangsal Kencana is a place to celebrate an important and sacred ceremony. While Gedhong Prabayeksa is another area of the Sultans Palace. Where the Royals keep the hereditary heritage.

Kemagangan is an exercise room for the King’s servants. Today, Kemagangan is the stage area for the puppet show or other performances.

To see the preparation area for the upcoming event in the Sultan Palace. Explore Panti Pareden, and Bangsal Pacaosan, the preparation place is next to the security guard area.

The sixth Plataran is Kemandungan Kidul, the oldest ward in Yogyakarta Palace. In the past, Kemandungan was located in a different city Sragen. This is where Sri Sultan Hamengkubuwono stays during the colonial era.

Sitihinggil Kidul function as the place for the King to see soldiers doing exercise before the Grebeg ceremony. The ward in Yogyakarta Palace still uses the Javanese name with a philosophical meaning behind it.

Exploring museums inside the Sultans Palace is one of many things palace guests could do. In fact, guests could see the treasury collection and heritage of the Royal family.

The heritage displays the collection of the Sultan’s ancient ceramics. Traditional dresses of the King’s family, servants, and paintings are also on display. Next, is the Batik Museum. In this spot, guests could see the batik collection and patterns from years ago.

What’s more, the complete tool and equipment to make batik are on spot. Plants that are used for coloring batik fabric. And last, there is an old water well that stores a lot of old coins. People coming to the well believe that if they threw a nickel inside the well. In time, their wishes will come true.

Yogyakarta Palace presents traditional performances every day for the palace guests. The interesting part is the dance performance is different each day. The dance shows take place in Bangsal Sri Manganti from 9 AM to 12 PM.

On Monday and Tuesday, palace visitors will get to see the gamelan performance. Wednesday is a folklore storytelling day with puppet shows. Thursday is gamelan and Javanese traditional dance.

While on Friday, watch the Macapat performance. A poem and song performed in the Javanese language. On weekend, the palace will entertain guests with puppets and a dance show. Unlike ordinary performances, the dance is telling the historical story of Javanese culture.

In short, the palace guests don’t have to pay an additional fee to watch the performances.

Yogyakarta Palace also hosts a cultural event every Tuesday (wage) on a Javanese calendar day. For example, Jemparingan day. Jemparingan is a traditional Javanese archery tradition. In the past, the tradition is performed by the Royal soldiers. Nowadays, common people are allowed to participate in this tradition too.

However, there are some requirements for participant guests who want to involve in this tradition. First, participants should wear a traditional Javanese outfit. Second, when shooting the arrow, participants must sit in a cross-leg style. The archers are not allowed to do it while standing. Just like the old Mataram style.

As the center of cultural heritage, Yogyakarta Palace also held traditional rituals and ceremonies. For instance, the ceremony of 1 Sura, Sekaten, Grebeg, Miyos Gongso and many more. Before visiting the Royal Palace, make sure to check the event schedule.

Traditional rituals and ceremonies are worth watching. Of course, the cultural feeling will be different for modern people.

Kraton Yogya opens every day, from 08:30 AM to 01:30 PM. But on Friday it will close early at 12:30 pm. The Royal Palace is also closed to guests during certain ceremonies.

There is two entrance gate to Yogyakarta Palace. The first gate is Tepas Keprajuritan located in front of the north Alun Alun. While the second gate Tepas Pariwisata is near the Kraton district and in the middle of the palace.

There is 2 entrance gate of the Sultans Palace. Visitors could buy entry tickets at both gates using the local currency. Meanwhile, the international tourist entrance fee for children and adults is the same price.

Read: Caving in one of the World Geopark, Jomblang Cave.

The Sultan Palace is the most important place for the locals. Wear a comfortable and proper outfit. The guests are not allowed to wear a mini skirt, shorts, cap, and sunglass.

Some of the building is forbidden for guests even for the servant. Last, the Palace does not allow guests to take pictures in some areas. And that includes the exhibition room such as Batik Museum.

To get more information about Sultan Palace, guests can hire a local guide. The guide is waiting and available to offer their service at the entrance gate. First, agree and negotiate on the price beforehand. The average price for the guide service is Rp. 100.000 for a group session.

Abdi Dalem or the Palace servant is more than happy interacting with visitors. In either case, guests could ask and get the answer to any question regarding the palace.

There are souvenir shops along the street in front of the Palace. It’s the second guest’s favorite spot beside the palace. Find many kinds of souvenirs, such as a keychain, paintings, masks, handicrafts, clothes, and batik. And be prepared and make sure to bargain.

How To Get To Yogyakarta Palace

The palace location is in the center of Yogyakarta. From the Tugu Railway station, walk 400 meters to Malioboro 1 shelter bus. Catch a Transjogja bus line 2A. And ask the bus driver to stop in the shelter in front of the palace.

Visitors could also try traditional vehicles, such as pedicabs or andong, the horse carriage to get to the palace. 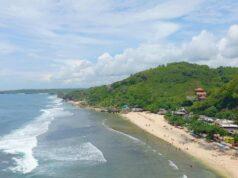 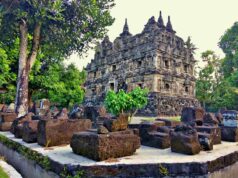