The Lost World Castle is not just a name. The park built a year ago in 2017, was literally sitting on a lost world – or village. The Lost World Castle Park situated at Kepuharjo Village, Petung District, Sleman, Yogyakarta. This region was severely devastated by volcanic ash and lava. During Mount Merapi eruption in 2010.

The entire village was wiped out. Remains of the catastrophe reveal throughout the village. Volcanic ash has not completely disappeared and former lava flow forms a volcanic sand river. From The Lost World Castle, Mount Merapi loom on the background.

The mountaintop is torn wide apart due to the eruption. The Lost Word Castle is not the only tourist spot. Sitting in the slope of Merapi Mountain. In fact, there is other such Merapi Museum and Merapi Lava site. All of this tourist attraction has one shared goal.

Not letting people forget what happened a few years back in their village. Remind and educate people at the same time of what volcano did. The government later made Petung area a tourism village as a rehabilitation effort. Hopefully, with tourist coming to their village. The area that once was lost will back to its track and vibrant again like it used to before the eruption.

Prepare to deliver to different kind of eras. From Jurassic to Medieval age. The imaginary world at The Lost World Castle transcends many era and cultures. In a way that the brain could hardly comprehend for its amusing randomness. First, explore the main medieval castle.

In which visitors will find the replica of the Iron Throne from the TV show Game of Thrones. There is also a medieval pool inside this castle. The vast green meadow in front of the castle hosts an Indian village. Two real size Indian huts stand only meters from a fallen triceratops.

The name of this section is “Wild Wild West”. Apparently, it’s a combination of the American frontier era with the Jurassic era – quite an interesting combination. Keep exploring the 1-hectare area to find more surprises. Climb the pirate ship ‘Black Pearl’ and feel like being a pirate from the Caribbean.

There are hobbit houses alongside a little wonderland with mushroom-shaped houses. The best wonder here is the castle’s fort which resembles the Great Wall of China. Walk along the top of the Great Wall to get the best view of Mount Merapi.

The imaginary world also comes in 3D form paintings. The paintings are fun to take illusion pictures with. Cross a bridge with sharks below or fly with the magic flying carpet. Be creative with the camera, and brag with everyone back home. The pictures will surely make an interesting post on social media.

Also, don’t forget to pose at the selfie spots. A selfie spot is almost always available in any recreational parks in Indonesia. The Lost World Castle included. Pose in front of the angel’s wing. Or the paradise gate resembling a stairway to the open sky. A couple of shots. While discovering the reason why the Indonesian local tourists love selfie spots so much – it’s simply fun.

Allow a few minutes to reminisce of how scary nature can be. With a visit to the House of Memory. These section of the park reveals the real remain of a house. Destroyed by the eruption a few years back then. The House of Memory wall is grey from the volcanic ashes.

Inside, a lot of furniture is still where it’s left. The heat from the ashes melts and damage every piece of furniture. House of Memory will remind visitors of the ruins of Pompeii. Fortunately, this is not as horrible. It counts 320,000 people from this region were able to evacuate right before the eruption.

There were still casualties. But disaster alert technology was able to prevent and save a lot of people from the disaster zone. House of Memory is a place to learn how important a proper disaster response system is.

The Lost World Castle is open from 7 AM to 6 PM every day. Including on national holiday. The most peak time is during the weekend, Saturday to Sunday. Make sure to see the weather cast before visiting the park. As most of the area is outdoor.

Nearby: Ullen Sentalu Museum, Culture & Nature All in One Place.

The ticket is Rp25,000 and free for children under 5 years old. Entrance ticket includes entries to all the attractions inside. There will be no more additional costs. Except if visitors want to rent an ATV, which cost Rp10,000 per session.

The parking lot at The Lost World Castle is spacious, enough to accommodate dozens of vehicles. There are decent toilets available. For hungry visitors, food vendors are plenty inside and outside the premises.

Offering food from snacks to full meals. There is also an ATV rental for anyone who wants to explore the area without a lot of walking.

How To Get To The Lost World Castle

There are still many broken roads near the location, due to the eruption. Cars need to be in a proper condition and the driver needs to be an experienced one. Therefore it is advisable to rent vehicles with driver, usually, start from Rp500,000/day. Unfortunately, public transport is not available to the location. 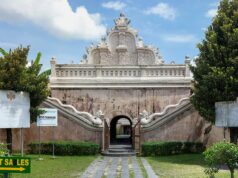 Surabaya Airport, Juanda International (JIA) is a stop for every tourist. Either just arrive and start or end the trip exploring Indonesia. Surabaya Airport...

For further question, idea dan more information please send us a message to [email protected] For advertisement and partnership contact [email protected] To become a part of our contributor you can send the material or portfolio to:
idetrips. 2019