For 15 years Jakarta Java Jazz Festival (JJFF) has arguably been the most elaborate music festival in Indonesia. Java Jazz Festival invites music fans to its venue, especially jazz enthusiasts. This year, the event will start from 1 to 3 March 2019 at JIExpo Kemayoran, Jakarta.

As it has done in the previous years, Java Jazz Festival 2019 comes again with an interesting lineup of musicians. Java Jazz Festival started bringing Jazz fans together in 2005. The event itself is the idea of Peter F. Gontha, a businessman and a jazz impresario.

The first festival in 2005 held for three days and attracted over 35,000 music fans. The enthusiasm inspired the organizer to make Java Jazz as an annual event. In total, the Java Jazz Festival has brought together millions of fans with the average attendance of 100,000 visitors each year.

Of the course of its 15-years history, Java Jazz Festival has invited famous international names to its stages. Among the most popular names are Ne-Yo, Robin Thicke, and Christina Perri, which created quite a frenzy among music fans in Indonesia. Indonesian musician is not by any means excluded. Top names such as Glenn Fredly and Tulus are regular performers at JJFF.

This year theme is “Music Unites Us All”. Which actually what Java Jazz Festival has been doing all these years. Although it has “Jazz” stamped on its name. JJFF celebrates the music of all types and genres. This year’s theme sums it all up.

Music does unite people. Despite differences, the underlying purpose of music is to bring joy for people indiscriminately. And such is JJFF 2019 mission.

This year’s artists lineup is no less epic than the years before. Toto is scheduled to rock JJFF’s stage on 3 March 2018. The legendary American rock band has been successfully keeping a presence throughout generations in this ever-changing music industry. Grab a spot at their concert to enjoy the performance of their number one hit “Africa”.

Introducing Gabriella Wilson a.k.a H.E.R. The 21 years old R&B singer has just won the 2019 Grammy Awards in February. Not only one but two awards: Best R&B Album and Best R&B Performance. Her attendance at JJFF 2019 will stir curiosity among the audience.

Some say she lives up to her Grammy-nominated “Best New Artist” reputation with her music. Watch her performance on Friday, 1 March 2019.

The Indian-American R&B singer Raveena Aurora is set to entertain JJFF goers on Saturday 2 March. Known as a singer who represents the voice of women of color, her music is both sweet and rebellious. Expect her soulful and sensuous voice as she sings her single “Temptation”.

The line up for local performers is as interesting as the international ones. Jakarta Java Jazz Festival is a chance to get to know the Indonesian music scene. There are hundreds of performers from all range of genre. From newcomers to maestros, there is plenty to discover.

Meet Dawa Bujana. He’s the guitarist of the legendary Indonesian Rock Band Gigi. He’s also a brilliant composer and music producer. He has collaborated with numerous musicians both aboard and in Indonesia. Get amazed by his latest work “Hyang Giri” as he performed with talented bassist Mohini Dey from India.

Celebrated jazz songstress Andien will hypnotize the audience on the second day of JJFF 2019. She is considered one of the best singers in the country, having produced 7 studio albums throughout her eighteen years of career. Listen to her melodious voice as she sings her singles such as “Kasih Putih” and “Indahnya Dunia”.

Indonesian pop star Isyana Sarawati is scheduled to perform on the final day of JJFF. The singer, whose hit single “Tetap Dalam Jiwa” rocked local music charts a few years ago, is a talented young musician. Isyana is gifted with both a beautiful voice and skills in various musical instruments. Prepare to be enchanted by her performance at JJFF and go home being one of her new fans.

Jakarta Java Jazz Festival 2019 will be held at Jakarta International Expo or known as JIExpo. The event starts from Friday, 1 March to Sunday, 3 March. The stages and performance begin from 4:30 PM to midnight.

See: Indonesian SIM Card, Tips & Where To Top Up.

How To Get To Java Jazz Festival Venue

JIExpo is located at Pademangan, North Jakarta. It is a 30-minutes drive from Soekarno Hatta International Airport. Visitors can get a taxi to reach the destination. Public transport is also available but it will require transits and takes longer overall. There are two options for public transport: by bus and by train.

If choosing the bus. Take Damri Bus line Mangga Dua – Soekarno-Hatta and stop at Mangga Dua Square. From there on, hop into Trans Jakarta bus line JAK-33. After four stops, get off at Sekolah Triwibawa Shelter and continue to walk to JIExpo. 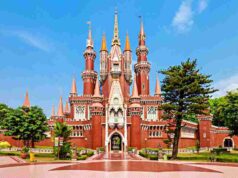